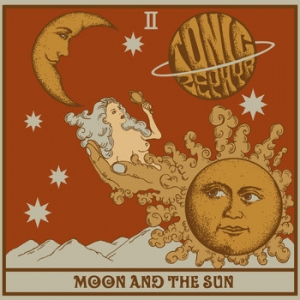 Moon and the Sun album art by Nik Gernert

Two years after scoring solid recognition with their debut album, Psychedelic Indie Rock band Tonic Zephyr is back stronger than ever with a new EP titled Moon and the Sun, another ambitious if well rounded production that easily matches the quality of their 2017 CD.

The five new tracks are an intoxicating melange of lyrical soundscapes, each crafted with masterful precision. Released as a single in late March, the first track, “Fancy Free,” is stylish, funky and provocative; “Gypsy Queen” is a lovely ballad; “Moon and the Sun” a wistful dreamscape, “Ether” a cosmic rock ballad loaded with great riffs, and “Scorpion” a hard rocking mystical epic. Influences spanning decades seem to filter through from early 70’s Heart and Led Zeppelin through 90’s Alternative, yet Tonic Zephyr’s trademark sound is entirely unique. Creative arrangements and excellent musicianship underlie these tracks. Singer Madi Gold’s lyrics are spellbinding and her enchanting vocals are consistently strong, pure and gilded with sincere passion. JT Loux’s guitars mesmerize with delicate arpeggios, well-crafted solos, melody lines, cool riffs and massive chords ringing with killer tone and clarity. The rhythm section is as solid as ever, particularly with Reilly Olsen lending some kickass bass phrasing to the mix. Despite TZ having something like a “wall of sound” at times each instrument stands out, a testament to the excellent mix on this album and the capable talents of producer and Tesla founding member Frank Hannon, who also supplied inspiration and guidance throughout the recording process.

So there you have it: superb production, thoughtful arrangements, contemporary appeal, each song featuring great dynamic range with softer parts dovetailing perfectly with powerful choruses and all stitched together with spirited lyrical charm, making this entire album a terrific listening experience. Check it out on Spotify and most other major streaming platforms now and get prepared for the official CD release party to be held at the Boardwalk in Orangevale, California on May 25th. Hope to see you there!