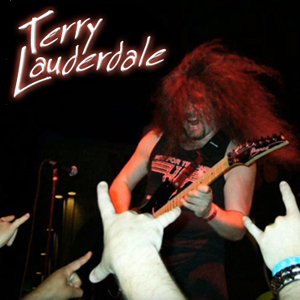 Terry Lauderdale is a true guitar virtuoso. Since the early ’80s he’s been in several bands, including Sabotage, Die Sieger, Champion, Acid Tongue and Heathen. These days he’s in an acclaimed Van Halen tribute band called Hot For Teacher, and he’s in a Randy-era Ozzy tribute band called Ozzy Alive! (see them December 30th at Holy Diver in Sacramento, California.) He’s in a UFO tribute band called Strangers in the Night. So he covers just about every note ever produced by Eddie Van Halen, Randy Rhodes and Michael Schenker (roughly sixteen quadrillion notes) just to keep his fingers warm, because he’s also in The Terry Lauderdale Band. And he does side projects like TL Solo, also full of brilliant original material, that he does with Skylar Thomas on keys. He just did one of those gigs on the hangar deck of the USS Hornet for the Blue Angels at Fleet Week in San Francisco. (The Blue Angels are all fans of his, and vice-versa.) TL Solo have also performed at the Whiskey A Go Go in Hollywood. Let’s see. Ah yes, he also gives lessons. Why not? Nobody will ever catch him.

So when he agreed to demo one of our Tantris stainless steel guitar picks for us we were grateful he could find the time to help us out. What he delivered was simply insane!

Heathen tracks of interest: “Arrows of Agony” and “Silent Nothingness” from The Evolution of Chaos.