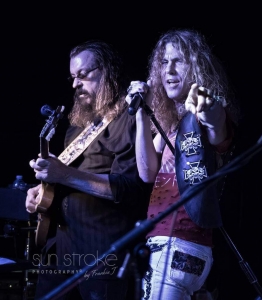 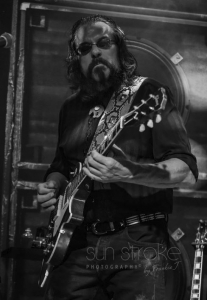 It’s always a big event when the Reno-based Greg Golden Band visits the Sacramento area and Saturday night, November 3rd, was no exception as the usual crowd of hardcore fans, bikers and famous musicians from all over Northern California packed into The Boardwalk in Orangevale to catch the show. But this night was to prove exceptional, not only in terms of the performances of all involved but also due to the guest musicians sharing the stage with the Greg Golden Band that night, a lineup which included Danny Kurywchak, Todd Baumgartner of Blackwater, Twanna Turner, and last but not least Frank Hannon of Tesla fame who would take to the stage later—sometime in the third act—as an unannounced surprise guest. And yes, there were three “acts” to this show: three 90 minute sets comprising a total of 48 songs.

Opening local rock band Tonic Zephyr infused psychedelic energy and got the gathering throng into maximum music appreciation mode with an exceptionally solid set of their own, a lyrical and mesmerizing sonic odyssey led by the inspired and textural guitars of J.T. Loux, the exquisite vocals of Madi Gold and solid backing by the rhythms of Reilly Olsen on bass and Ricardo Ucles on drums.

A short while later The Greg Golden Band hit the stage and the now-energized crowd roared back to life as the band launched into their first number, an oldschool-headbangin’ cover of the Stones’ “Jumpin’ Jack Flash,” so when the first chorus wheeled around charismatic frontman Keith St. John implored the audience to join right on in, prompting the crowd to cheerfully belt out that “it’s alright now!” as he hovered the mic out over the crowd. Having accomplished his mission to get the fans jumping Keith turned the mic over to the dynamic Lowell Hackney for lead vocals on the Stevie Wonder classic “Superstition,” on which Greg’s ever-resourceful and long-time rhythm guitarist Jeff Montgomery played a harmonizing lead guitar alongside Greg’s to great effect, followed by the GGB’s Far Away. Lowell then turned the mic over to Jeff for a couple more of the band’s classics, “Old School Rock n’ Roll” and “Burning Hearts,” on which Jeff played a 12 string Washburn acoustic as he sang his heart out. The irrepressible Lowell then relieved Jeff on vocals for still more crowd-pleasing GGB classics like “Far Away,” and “Cherokee.” Guest and fellow Reno vocalist Todd Baumgartner from the band Blackwater sang “Call of the Wild” in a highly spirited performance that really resonated with the audience. Then it was Keith’s turn at the mic again. Well you get the idea—there was always a fresh vocalist waiting in the wings so there was no reason for any one of them to hold back at all, and of course they each gave it everything they had. And the whole time Greg Golden himself was playing with reserved precision, perfectly dialed-in but still only just getting warmed up at this point. The band wrapped up the first set with a few more songs that really truly rocked and had several people dancing; songs which included a blistering version of Kenny Wayne Shepherd’s “Blue on Black,” Dylan’s “All Along the Watchtower,” and Freddie King’s “Going Down,” featuring Danny Kurywchak playing lead guitar like a man possessed by Blues demons. The Rolling Stones’ “Honky Tonk Women” had Keith St. John briefly relieving rhythm-maestro Michael Young on the drums while the innovative and multitalented bassist David Strelz took over the lead vocals and Twanna Turner, lovely “fonk” singer and daughter of the late Ike Turner, sang backup in her first onstage appearance of the evening. That was answered by Deep Purple’s “Smoke On The Water,” where Greg took his trusty Goldtop Les Paul to the front of the stage and proceeded to unleash that epic solo with such conviction that he effectively upped the ante for the sets that were soon to follow and left the audience raring for more as the musicians took their first break of the evening.

So when the band returned to the stage there were high expectations to be met. The band has a usual repertoire but they like to mix it up as well, and tonight there were also guest singers yet to be featured. Twanna Turner returned to the stage, this time to front the band with her powerful, soulful voice as they covered a set of classic R&B hits that included B.B. King’s “The Thrill is Gone,” The Temptations’ “Papa Was a Rolling Stone,” Creedence Clearwater Revival’s “Proud Mary,” which of course was popularized by Ike and Tina Turner and is now an important part of Twanna’s own family’s musical legacy. A number of other great classics rounded out the set.

For the finale the audience received a Hail Mary pass of hard rock, heavy metal and blues that would set new standards for concerts to come. “Voodoo Chile” was presented in wild, wicked, Hendrix-true form. ZZ Top’s “Waitin’ For the Bus / Jesus Just Left Chicago” was another solid rendition. Rainbow’s “Man on the Silver Mountain” was the gnarlier, slower and heavier version that Doug Aldridge played with Dio in later years. “Rock the Nation,” familiar to many as a Montrose classic was another crowd favorite. At some point Frank Hannon took the stage. It’s always fun to hear Frank play because he is so very good on the guitar, and has not only a great voice but stage presence and showmanship that really draws the audience’s focus. “Rock ‘n Roll Hoochie Koo” was a wild rocker, “Sympathy For The Devil,” was heavy and great, and was followed by a brilliant performance of “Little Wing” which included some of Greg’s own improvisational flair in addition to Frank’s traditional Hendrix-faithful soloing, then “Rock Candy,” which was obviously familiar territory for longtime Montrose frontman Keith St. John whose own stage presence perfectly complimented Frank’s skillful rendition of the rock legend’s classic arena-rocker.

Hendrix’s “Red House” was a fitting closer for a show of such epic proportions in general, and guitar talent in particular. For this show the Greg Golden Band delivered a huge amount of kick-ass rock and roll that will not be soon forgotten by those of us lucky enough to attend.

Keep an eye out for the next time the Greg Golden Band comes around…you won’t be disappointed!